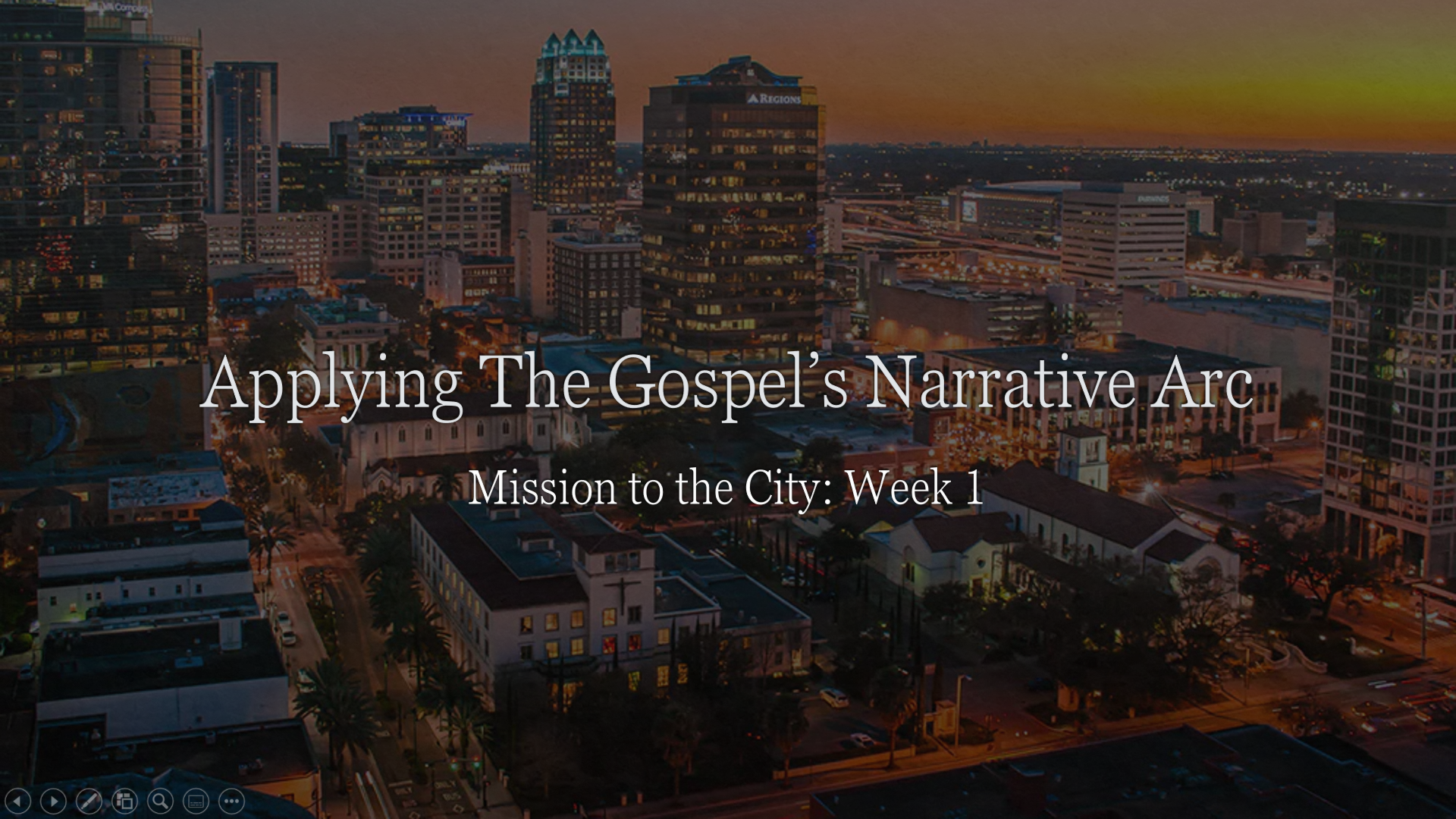 Mission to the City: Week 1

Audio only on soundcloud here.

What is the Gospel?

Thinking about the Gospel:

But the Gospel is bigger than us. In Surprised by Joy, Lewis says this: “What I learned from the Idealists, and still most strongly hold, is this maxim: it is more important that Heaven should exist  than that any of us should reach it.”

God invites us into the drama, in Christ reconciling the world to himself.

There is a prevailing Kingdom theme in Scripture:

We know the ending, that the Kingdom [all things under God’s reign] will be restored! Therefore, we have hope. But, whether you believe or not, consummation is coming. The kingdom will be restored.

When Jesus announces the kingdom, he introduces a reality that was meant to serve as a trustworthy compass for all we do in life.

In both instances there is both a process and a result. The process is moving from Good to Bad to ‘Perfectly Good’. But the result is a new creation. We will be a new creation and will experience that fully in the new heaven and the new earth and the earth will also be a new creation. The tension is the already/not yet.

When we are out of balance we focus on one over the other. I would assume we can all agree on the tenants of the personal. We are sinners, depraved, we need Jesus. He is the only way, etc. Emphasize reformed dogmatics.

Incarnation: The Son of God came into the world as a man

Substitution: In our place condemned he stood

Restoration: The Judge will act

When talking about “Why we are here” NT Wright says:

“The fundamental answer…is that what we’re here for is to become genuine human beings, reflecting the God in whose image we are made, and doing so in worship on the one hand an in mission its full and large sense, on the other; and that we do this not least by ‘following Jesus’. The way this works out is that it produces, through the work of the Holy Spirit, a transformation of character.”

Why are we here? To reflect the image of the creator. To care about what the creator cares about. We want, crave, to be remade in the Creator’s image and then sent, as him image bearers, to and for the world.

What about me?: A Personal Framework for Mission

Lewis says, “I believe in Christianity as I believe that the sun has risen: not only because I see it, but because by it I see everything else.”

What are my strengths?

Where am I located?

When am I located?

Why am I serving?

How is God using me (right now) in the restoration of the Cosmos?

The narrative of God’s unfolding drama includes our own narrative arc of Christian worship where we gather, listen, commune, and are sent…We are sent out to inhabit the sanctuary of God’s creation as living, breathing “images” of God. We bear his image by carrying out our mission to cultivate creation and invite others to find their humanity in this story. – James Smith

May we, as a church body, strive for true Gospel Renewal.

Gospel-shaped believers who belong to churches that are experiencing gospel renewal often have a deep, vital, and healthy impact on the arts, business, government, media, and academy of any society.

God says to us, sweetly, come, child, take part. When you serve a righteous king, you want the kingdom to flourish and prosper.

DIY Religion - What is it and Why it Doesn't Work