An Easier Way to Read Revelation 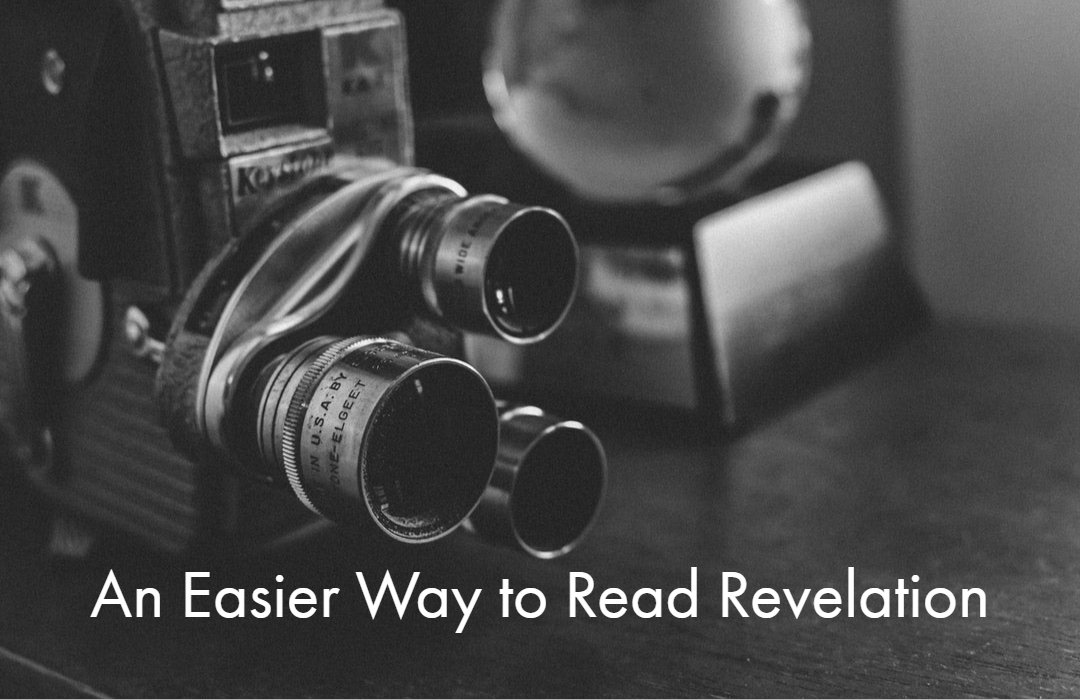 Dragons, angels, cherubim, scrolls, candles, anti-Christs and even a great prostitute. Forests have been decimated simply on the graphs and charts needed to make sense of it all. I would like to suggest a way to read Revelation free of charts, graphs and Tylenol.

A huge thanks to Dr. Michel Kruger for this helpful phrase and Reformed Theological Seminary for making this so much clearer to me!

Revelation isn’t meant to be read as one chronological set of events, but one set of events repeated seven times. Imagine watching the final play of a football game seven times from seven different camera angles. That is what is going on in Revelation. So what is that play?

The Two (and only two) Comings of Jesus

Each of the seven sections takes a different look at the inter-advent period. That is, the period between and including Jesus’ two arrivals (with a heavy emphasis on the second coming). And yes, if you read it this way, Jesus only comes back once. No fancy charts and diagrams. Jesus doesn’t come once for believers and again for unbelievers. No Left Behind style rapture. It’s much simpler than that because that is the way Revelation was intended to be read.

If an ancient Jew read the business section of the Wall Street Journal, they would be very confused. Why? Because they don’t understand that genre of writing or the meaning behind many of the terms. In the same way, we have trouble understand this genre of apocalyptic writing without some background.

Jesus addresses the seven churches. These churches represent all churches that will exist in the inter-advent period. We know this because in Jewish apocalyptic literature the number seven represents perfection or wholeness. It is no coincidence that there are seven churches, seven lamp stands, seven seals, seven scrolls, seven days of creation, seven times sprinkling at the altar and seven years of jubilee.

Reset. The second section of Revelation largely deals with the scroll, seven seals and the 144,000. The scroll represents God’s finished (hence written on both sides so nothing could be added) plan for the inter-advent period.

The seven seals represent the trials placed on Earth during the whole inter-advent period culminating with God’s judmgent. As the seventh seal is opened, we get our first glimpse at Jesus’ return.

As for the 144,000, they represent the fullness of God’s people redeemed from every tribe, tongue and nation. For more on that I recommend Kevin DeYoung’s article here.

Reset. The seven trumpets are blown. They happen concurrent to the seventh seal (God’s judgment) being opened. These trumpets usher in God’s judgement in the seven corresponding areas of creation (Earth, sea, rivers, sun/moon/stars, pit of the abyss, river Euphrates and lightening/hail).

In chapter 11, we also see Jesus’ return from a second angle increasing in intensity as the 24 elders worship God.

Reset. Here we see the second coming again as the great dragon, Satan, persecutes the church. The intensity is again increased as John uses the imagery of the wine press for God’s great harvest only instead of juice flowing, it’s blood.

Reset. Here we get a fourth view of Jesus’ second coming. You can see how confusing it would be if this were read chronologically. In this fifth section, John describes the seven bowls that represent the wrath of God being poured out on the Earth culminating in the great battle of Armageddon.

Look at 16:17 where the voice from the throne says “It is done!” If read chronologically, it would be difficult to understand this end in light of the endings we see in angle six and seven. Again, this is just one more camera angle of the one and only end of the world as we know it.

Reset. The end, again, increasing in intensity. The great battle and the marriage of the church to the Lamb. The enemies of the Lamb are then thrown into the lake of fire.

Reset. The battle again! Then the new heavens and new Earth. If read chronologically as if there were no reset between chapters 19 and 20, you would need more diagrams than a JFK conspiracy theorist and you would be more confused than you were at the series finale of Lost.

Recapitulation is the way Revelation is meant to be read. Seven views of the same event.

Now, I’m not saying there still won’t be some hiccups along the way, but if you read Revelation the way it was designed to be read, things get a whole lot simpler.

This is very insightful and helpful!
And the timing is perfect for what I am currently studying in my own quiet time right now. Thank you!